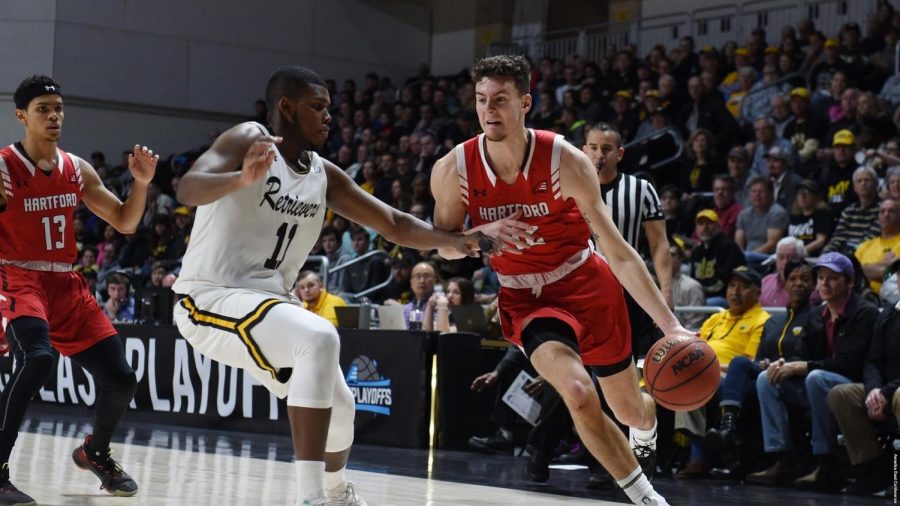 The University of Hartford’s men’s basketball team suffered a tough lost this past Tuesday against UMBC. This proved to be the final game of the Hawks’ season as they would ultimately fall in double overtime in this semifinal America East game. However, no one would have thought that this game would go into double overtime from how the game looked at the start. This start saw the Retrievers with as much as a 20-point lead in the first half.

However, the Hawks were able to reduce this deficit a bit as the half ended with the Hawks trailing 37-18. Then the second half commenced which started with the Hawks having déjà vu from the first half as the Retrievers increased their lead tremendously. It was not until the score was 50-24 with the Hawks behind that a rallying spirit broke through for the Hawks. This spirit manifested itself in the form of a 30-9 run for the Hawks as their deficit was almost completely destroyed trailing by only six points with about five minutes to go. The Hawks continued to close this 59-53 margin as Jason Dune’s three-pointer put the Hawks within a single point of UMBC with only seconds remaining in the game. Thanks to a three-pointer by J.R. Lynch, the Hawks were in the lead, 68-67.

However, the Retrievers wouldn’t give up the fight as K.J. Jackson sank a free-throw to even it out at 68 to put the teams into overtime. The first overtime saw some back and forth with the Hawks in the lead thanks to Lynch scoring with again, only second left on the clock. However, Brandon Horvarth got fouled and scored both free-throws in the last seconds of the first overtime to tie the score again.

The final overtime saw the Hawks unable to take the lead at all. With the final seconds of this game, the Retrievers would take advantage of their foul-shots and get ahead of the Hawks just in time to end the game 90-85. This marks the second year in a row that the Hawks lost to UMBC in the America East Semi-finals.

This marks the best two-year run for the men’s basketball team in program history, making it to the semifinals two years in a row. This is in many ways thanks to the five starting seniors, George Blagojevic, John Carroll, Jason Dunne, J.R. Lynch, Max Twyman, and Travis Weatherington.