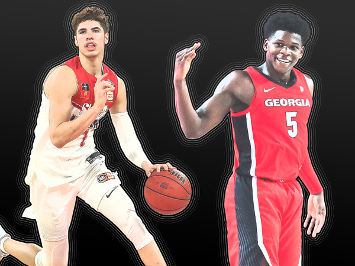 The NBA Draft is a week away!  After an exciting 2019-2020 season, many teams hope to make moves to elevate their roster in this draft.  Here’s a look at the first five picks and how they could go on November 18th.

Many expect the Timberwolves to select playmaking and scoring point guard LaMelo Ball with the 1st pick.  He could pair nicely with their star center Karl-Anthony Towns and star guard D’Angelo Russell.  There have also been talks about the Timberwolves trading this pick for a point guard who has already established themselves in the NBA, like Ben Simmons for example.

The Golden State Warriors are a championship-caliber team led by 2-time MVP Stephen Curry and all-stars Klay Thompson and Draymond Green.  Due to unusual circumstances with Steph and Klay injured the Warriors fell deep into the lottery and landed the 2nd pick.  James Wiseman has terrific athleticism and could be the center they’ve been looking for. Perhaps the Warriors will once again be title favorites after draft night.

The Charlotte Hornets have been a disappointment for quite a while.  However, they might get a chance to turn it around with this pick.  Anthony Edwards is a player who has a lot of potential just from his athletic ability and his physical build.  The Hornets have a couple of promising prospects in point guard Devonte’ Graham, and power forwards Miles Bridges and PJ Washington.  Anthony Edwards would fit well in their rotation and could be the franchise player they need.

The Bulls have been interested in Okongwu for a while.  Although they already have a pair of young bigs in Lauri Markkanen and Wendell Carter Jr., Okongwu would likely be the best player available here.  He has drawn comparisons to the Miami Heat’s Bam Adebayo as a great defender and good offensive rebounder.  He would be a great addition to the Bulls rotation.

The Cleveland Cavaliers are still in rebuilding mode after losing LeBron James in free agency in 2018.  They have a few good young prospects in Kevin Porter Jr., Collin Sexton, and Darius Garland.  They also have a few good veteran bigs in Kevin Love, Andre Drummond, and Tristan Thompson.  With this roster, they have had struggles on both sides of the ball.  Isaac Okoro could be a big help defensively as he’s one of the best defenders in the draft.  As it looks now, the Cavaliers won’t be contending any time soon so I would look for them to trade some of their veteran bigs for young players or assets.

This looks to be an interesting draft as there are so many options for the first round of picks and there is no obvious best player or best group of players.  I expect to see at least a few trades on draft night that could potentially shake up the league.  We may even have new title favorites on draft night!