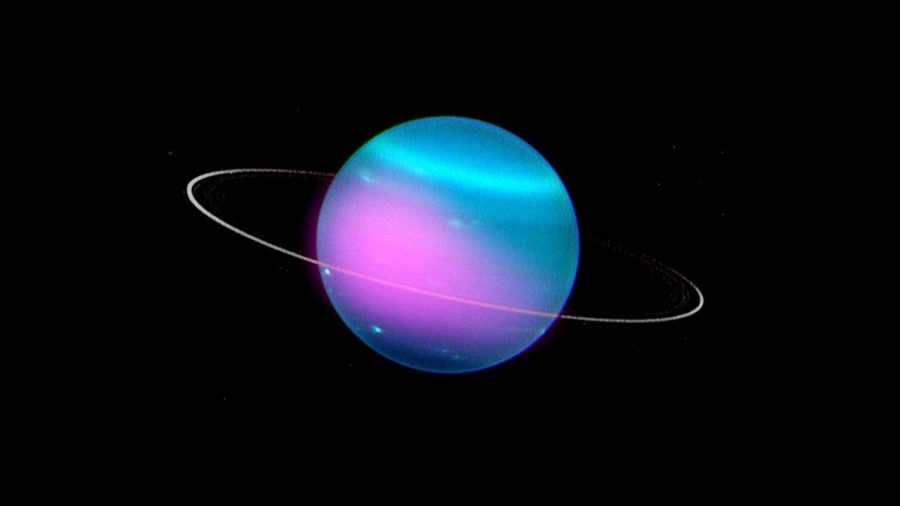 Uranus is the seventh planet from the Sun and has two sets of rings around its equator. Since Voyager 2 was the only spacecraft to ever fly by Uranus, astronomers currently rely on telescopes much closer to Earth, like Chandra and the Hubble Space Telescope, to learn about this distant and cold planet that is made up almost entirely of hydrogen and helium.

Uranus is an especially interesting target for X-ray observations because of the unusual orientations of its spin axis and its magnetic field.  Uranus is tilted on its side, making its magnetic field tilted by a different amount, and offset from the planet’s center. This may cause its auroras to be unusually complex and variable. Determining the sources of the X-rays from Uranus could help astronomers better understand how more exotic objects in space, such as growing black holes and neutron stars, emit X-rays.

The new study determined several possibilities for how Uranus emitted its own X-rays. One possibility is that they were caused by the Sun, where the scattering of the Sun’s light spreads in a similar way that Earth’s atmosphere does. Also, the energetic particles that are already in Uranus colliding with the rings may cause the rings to glow in X-rays.

Chandra hopes to expand upon their new discovery to find the true source of Uranus’s rings.