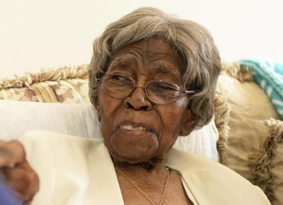 Hester Ford; a North Carolina woman who was recognized as the oldest living American; passed away peacefully this past Saturday.

According to the Gerontology Research Group (GRG), Ford was at least 115 years and 245 days old at the time of her death. Her family, however, clarified that she was born on August 15, 1904, which would actually make her 116 years old.

Ford was born on a farm in Lancaster County, South Carolina. She grew up plowing and picking cotton.  Hester married John Ford at age 14 and gave birth to the first of her 12 children at age 15.

“She was a pillar and stalwart to our family and provided much-needed love, support, and understanding to us all,” her great-granddaughter, Tanisha Patterson-Powe, spoke of Ford in a statement.  “She was the seed that sprouted leaves and branches which is now our family. God saw fit to make her the matriarch of our family and blessed us to be her caretakers and recipients of her legacy.”

Ford lived through the Spanish Flu, both World Wars, and the Civil Rights Movement.  Over the century, she has seen her country grow in numerous ways.  “Her light shined beyond her local area and she lived beyond a century with memories containing the real-life experience of over 100 years,” Patterson-Powe said in her statement. “She not only represented the advancement of our family but of the Black African American race and culture in our country. She was a reminder of how far we have come as people on this earth.”

In her final years of life, her family said her routine “involved a breakfast that always included half a banana, a trip outside for fresh air, weather permitting, and sitting in her recliner looking at family albums, doing puzzles, and listening to gospel music.”

Robert D. Young, director of the GRG’s supercentenarian research and database division, believes that the new “oldest living American” is believed to be Thelma Sutcliffe, 114, of Nebraska.