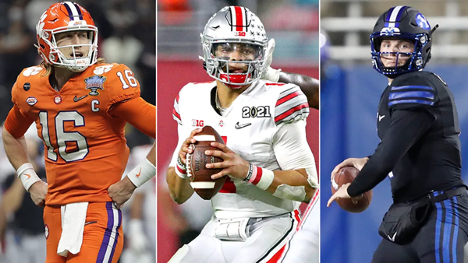 Trevor Lawrence is pretty much unanimously viewed as the top prospect in this year’s class and one of the best QB prospects in a while.  He played at Clemson for three years and had a great career there with over 10,000 passing yards and a completion percentage of 66.6%.  At 6’6”, 220 lbs, he is a big player and can throw passes over defenses with ease.  Lawrence should be a great franchise quarterback for the Jacksonville Jaguars, who have the first pick.

Zach Wilson is currently regarded as the second-best quarterback in this year’s class.  After playing for 3 years at BYU he is ready for the NFL and looks to be a franchise quarterback.  At 6’3”, 203 lbs, he’s built to be a quarterback and on top of that has great decision-making and mental toughness.

Justin Fields was viewed as the second-best quarterback in this class for a while, but his draft stock has recently dropped.  Now he is considered somewhere between 3-5 in this year’s quarterback class.  Fields played a year at Georgia in 2018 and then transferred to Ohio State where he played another two years.  Although his draft stock has fallen for seemingly no reason, he is still a great prospect who can make a difference in the NFL.  He is 6’3”, 223 lbs, and the fastest of the top 5 QBs in the draft with a 4.49-second 40-yard dash.

We almost know for certain that Trevor Lawrence will be going first overall to the Jaguars, but anything can happen after that.  Whatever happens, it will be exciting and hopefully, we will be watching these young stars for years to come.