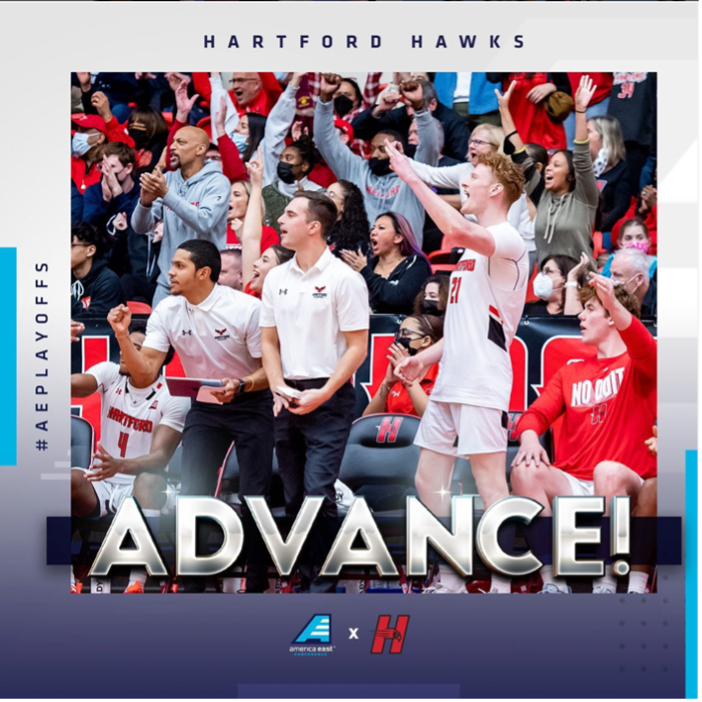 On Sunday afternoon, the Hartford Men’s Basketball Team faced off against the University of Albany Great Danes in the 2022 America East Conference Quarterfinals inside a packed Chase Family Arena. The first four minutes of the game were highly uneventful as both teams struggled to find the bottom of the cylinder. Junior Moses Flowers scored the first points of the game, with 14:52 remaining in the first half. However, once the ball finally went through the hoop, both teams started to pick up the pace. The fans of the Hawks were instantly given a thriller!
Following the basketball by Flowers, the Hawks instantly gained their confidence back, and the rim looked significantly larger than it was at the start of the game. Graduate student Traci Carter, who played a massive part in the Hawks NCAA March Madness Team, took matters into his own hands as he led all scoring with 21 points. Carter, after the game, spoke with announcers Jeff Dooley and Adam Finkelstein and said the famous three words of March, “Survive and Advance”. Senior David Shriver, who has been ridiculously hot for the Hawks, dropped another double-digit affair with 16 points with twelve from long distance. The Hawks, who could have just played their final home game as a member of the America East Conference, were sure to leave the neighborhood going home happy.
The Hawks currently ride a seven-game AE playoff win streak and will look to increase that number as they battle UMBC in the semifinals on Wednesday in Maryland. This is the fifth consecutive year the Hawks advanced to that stage. The last time the two faced off in the semifinals was back in 2019, where UMBC defeated Hartford 90-85 in double-overtime. The Hawks will be looking for redemption to advance to their third straight America East Championship Game.