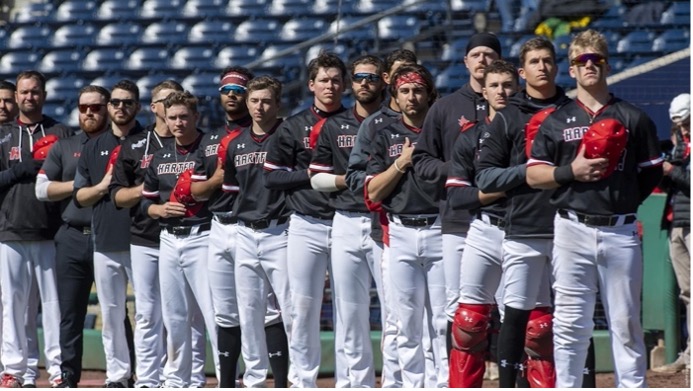 The Hartford Hawks Baseball team is now 2-9 in conference play after dropping their recent doubleheader to Stony Brook after winning the first game on Friday. After an impressive win to start the series, Head Coach Steve Malinowski and his team seemed to have figured it out. However, Saturday’s doubleheader depicted the Hawks’ recurring struggles. Saturday’s two games took place at Dunkin Donuts Park, home of the Hartford Yard Goats. The visitors got off to a hot start scoring three runs in the first inning of game one. The Hawks rallied to tie and eventually took the lead thanks to a two-run home run by Hawks Junior Tremayne Cobb Jr. Once again, a late surge by the opposing team cost the Hawks. Stony Brook stormed back with a pair of runs following consecutive unforced errors taking game one with a final score of 9-5.
Game two was identical in the storyline as the Hawks failed to close yet another game leading to a 7-5 loss at home. Stony Brook’s bats proved to be too much for Hartford. The Hawks tried to rally back late when Ben Maycock launched a home run over the right-field wall, but it wasn’t enough. Both Derek Tenney and Ben Maycock had multi-hit games in game two. Junior pitcher Will Nowak picked up the loss as he struck out two batters while giving up five runs.
The Hawks look to bounce back in their next game. Next up, the Hawks will face the University of Rhode Island on Wednesday, April 6, on the second of a six-game road trip.